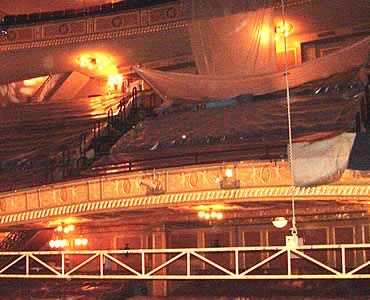 Jujamcyn Theaters – After Hurricane Irene, The Show Goes on as Planned.

Two of Jujamcyn Theaters’ landmark Broadway properties suffered serious damages when Hurricane Irene struck New York City. One-of-a-kind and irreplaceable walls, ceilings, and gold-leaf landmarked interiors were severely damaged or destroyed. In the aftermath, it was feared a heavily advertised upcoming Broadway show would have to be canceled – potentially adding to the overall loss and devastation.

East Coast Adjustment LLC was hired to assist in the financial recovery and to expedite the complex repairs process to these historical landmarks. ECA worked tirelessly to ensure an appropriate payout sum as well as prevent the disappointment of a canceled major Broadway show before it even hit the stage.

Paul Libin, Executive Vice President of Jujamcyn Theaters, wrote in a letter to ECA: “Due to your talented and professional assistance, we were able to fully recover our losses and, unbelievably, were able to open the show on time!”

East Coast Adjustment not only understood the intricacies involved with this kind of loss, but also the compounded problems associated with canceling a Broadway show as the result. Specific knowledge of this type of loss and a dedication to working quickly and accurately meant business for Jujamcyn Theaters could continue – and the show could go on as planned.

We can promptly report the loss to your agent or broker or directly to your insurance company.